The smallest stand-alone trigger in the world can fire the largest thyristor you would ever use!

One Active Trigger Unit (ATU) replaces pulse transformers and associated circuitry and may be directly connected to the outputs of microcontrollers, microprocessors, CPLDs and FPGAs. It triggers any size thyristor, including amplifying-gate devices, under all possible load conditions. The only requirement is a 12mA control signal and since it derives its power from the anode of the thyristor, no power supply is needed. As long as current flows into the control terminals of the ATU, the thyristor remains triggered. This is a useful feature when the thyristor is required to control highly inductive loads where it is recommended that a continuous pulse instead of a train of pulses is used. The gate of the thyristor is driven from a voltage source of 22V. This eliminates the need for very short gate leads, even in hostile environments. Twisted gate leads in the order of 1m can be used while maintaining a high rate of rise of gate current. The units are intended for mains voltages from 100 - 690Vrms and the high-voltage modules for 1 250 and 2 500Vrms.

Click on image of module to view PDF datasheet. 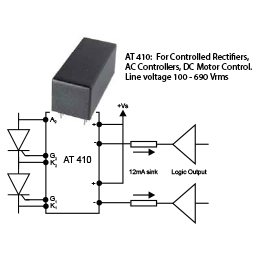 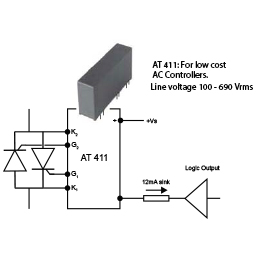 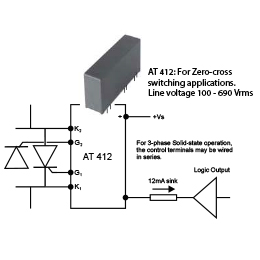 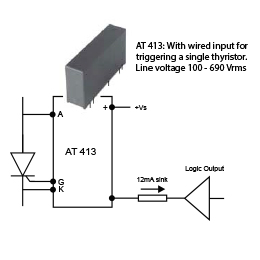 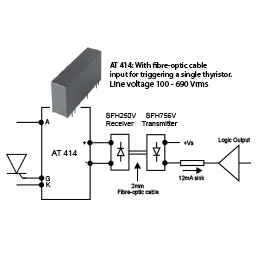 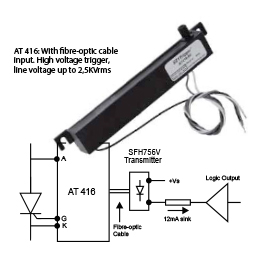 The Thyristor is triggered by deriving the gate current from the anode of the device, thus a small electrically-isolated control current initiates a large gate current without the need for a gate drive power supply. Upon application of the control current, the thyristor receives a fast-rising gate current which is fully maintained until the anode voltage of the thyristor collapses below the threshold voltage after it is triggered. This method of operation accounts for the low power dissipation of the trigger unit. Current flow is initiated by an opto-coupler which provides the electrical isolation. By maintaining the gate current long enough to reach the latching current the system can be safely used in applications with large inductive loads. The anode voltage of the thyristor must be at least 14V before the gate current reaches 200mA. 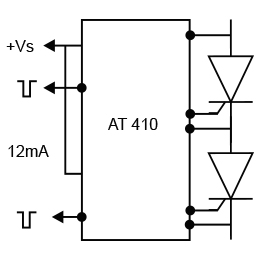 The full gate current is maintained until the when the anode voltage goes below 14V. The rise-time of the gate current is approximately proportional to the supply voltage and is typically 2A/µs. With the 12mA signal applied, there is a small turn-on delay of approximately 30µs and the full dv/dt can only be re-applied 100µs after removing the trigger signal from the control terminals. The turn-on delay tdi, can be reduced by pulse shaping because it is inversely proportional to the control current. The envelope of the voltage across the thyristor can have any desired shape provided the rms value is below Vm and the peak value does not exceed Vp.